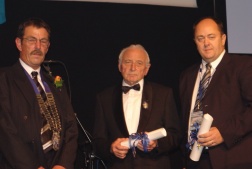 The Annual Conference is an ideal time and place to recognise those who deserve a special mention for their long-standing commitment to the IOQ. This year two Honorary Fellowships were awarded.

Pictured here with Steve Ellis, are Russell Vickers owner of Vickers Quarries (Stratford) and President of the IOQ 2001-2003, and Eric Souchon, General Manager of Leach Quarries, Paeroa. Eric held the chairman’s role for the Aggregates and Quarry Association from 2003-2004.

Both members have been tireless workers for the IOQ.