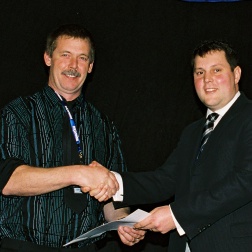 Stephen Garwood looks very pleased to have received the 2006 Gough CAT Award, presented here by Matt Keen, Sales and Marketing Manager for the CAT Business Unit
He joined Higgins Aggregates in 1994 working at the Sanson Metal screening plant and eventually transferring to Bulls a few years later due to staffing needs.

He was one of the first employees at Higgins Aggregates to hook onto the ExITO Training Scheme and with the extra knowledge came some extra responsibilities – being appointed as Site Supervisor for both the Bulls and Sanson plants. Sanson is a shingle-screening operation; the Bulls operation manufactures mostly road materials.
He successfully engineered the application of the two plants to manufacture Transit M/4 spec basecourse right down the middle of the grading envelope. Since then Steve has been fully involved with the fabrication and erection of a new crushing plant at Bulls which was commissioned early this year.
Steve’s plant won the Higgins Interplant competition, whic evaluates the various Higgins’ plants based on audit results, house-keeping, environmental practices and the like.

He achieved his A Grade COC and Supervisors National Certificate and was appointed Site Manager in 2003.
Steve runs a tidy and well-organised plant demonstrating that he is a capable operator and supervisor.
Steve has been an IOQ member for a number of years, attends the local meetings, and was elected Secretary of the Central Districts Branch this year.