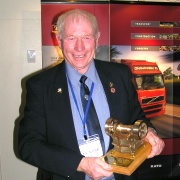 Balfour Lime Quarry was opened in 1936 and privately owned until 2000 when Ravensdown took over. Balfour produces approximately 35,000 tonnes of Agricultural Lime per year.

Lex’s association with Balfour Lime began 26 years ago when as an A Grade Mechanic he was required to repair and work on the mobile and kiln drying plant at the site.

When Lex first started at Balfour, Rod Ross the Ex OSH inspector was the manager. Lex Robb has been the Manager at Balfour Lime for ten years. During this time he has made a number of innovative improvements to the plant, to increase efficiency and make the plant a safer place to work.

Lex has made numerous modifications on the plant and four examples of the more successful improvement are described below:-

1. External Oassitier Adjustment on Pulverised Fuel Burner
A device was created to allow external adjustments to classifiers on a Duplex type pulveriser on a pulverised fuel burner. 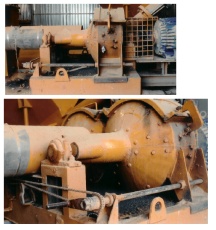 Efficiency
Efficiency has been increased considerably by adjusting the classifiers externally. ?Initially we had to shut the plant down, open the pulveriser, make adjustments, close and restart the plant. If adjustments needed correction, this entire process had to be repeated until the required result was achieved, which caused constant delays.? Adjustments can now be made without shutting down the plant and the result can be observed as an adjustment is taking place. The entire process is completed quickly and effectively saving time and coal
Maintenance
This arrangement requires minimal maintenance. The pulveriser is opened less often, less coal is used, which reduces wear to the classifiers and pulverisers.
Safety
The safety factor has been vastly increased. The pulveriser stays closed and classifiers are not handled by the operator -as required by the previous, internal adjustment method.
Innovation
The external adjustment idea was designed and manufactured at Balfour Lime Company and has been successfully used for at least 15 years. ?To the best of my knowledge it is not utilised at any other similar processing plants.?

3. Surge Bin
We have designed a surge bin to hold 300 tonnes of primary crushed limestone that allows the drying plant to operate for long periods without the need for a primary crusher operating continually.
Efficiency
The bin was designed not to block during normal operation, as similar bins are prone to do. The design proved successful. The flow of material is at a constant rate and only needs operator assistance on the rare occasion we require to completely empty the bin.
Maintenance
A hydraulic-driven apron feeder is used to empty the bin, which has ensured a virtually maintenance-free system for over 20 years.

Safety
Openings near the base of the bin were incorporated into the design in order to assist the flow of material when completely emptying the bin. This allows the operator to empty the bin without entering it at any stage increasing operator safety.
Innovation
Several innovative features have been incorporated to provide an efficient and safe operation, such as the bin’s specific cross-section, the considerable contact area between the material and the feeder, the use of an apron feeder for emptying the bin and access openings. These have proved to be a winning combination for over 20 years. 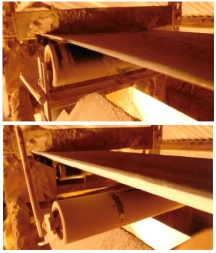 The system employs a flat return roller to lift the conveyor belt from below so that the top surface of the belt contacts a fixed, angled scraper. It is quick and easy to operate.
The top photo show the roller in “scrape” mode and in “normal” mode (bottom).
Efficiency ?We have found it to be more productive than other conveyor belts systems. Most product removal devices require scrapers to be moved, or incorporate a mobile system which runs along the conveyor frame and the belt ? requiring a longer belt and extra drums. Such systems also require stopping the plant to adjust and fill different sections of the shed, resulting in loss of production.?
Maintenance
Once the initial fitting and shaping to the conveyor belt has been completed, our method is virtually maintenance free.
Safety
The operator can engage the scrapers without being close to moving belts by using one of three systems to position the rollers – air, hydraulic or electrical.
Innovation
The idea to lift the belt rather than dropping the scrapers was conceived by Balfour Lime Company. This system has been replicated and successfully used by other plants