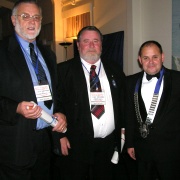 Andrew Robertson (left) and Andy Loader were each awarded an Honorary Fellowship for their long standing service to the NZ branch of the Institute.

Both served the industry firstly in quarrying roles, and later as Quarry Inspectors.

Both Andrews have served on the IOQ Executive, with Andy Loader holding the NZ Chairman’s office during 1991-1993. Congatulations Andrew and Andy.

President Brian Bouzaid made the presentations at the Volvo Awards Dinner.