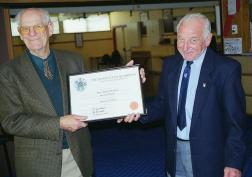 In May 2002, a couple of months prior to the Palmerston North Conference, a surprise dinner was arranged at his favourite local – the Havelock North Club.

A dozen or so IOQ members were there to witness the presentation of Honorary Fellow to one of the founding members of the NZ IOQ – Bruce Webster .

He is congatulated here by President Russell Vickers. Bruce was a founding member of the IOQ.

The Webster Family Trust have since donated a scholarship for furthering education of up to five IOQ members per year.